In search of the Northern Lights

Observing the Northern Lights (Aurora Borealis) is something that appears on many a person’s bucket list. I have been lucky to see them myself on a number of occasions – in Finland, Norway, Iceland and rather unusually, in East Anglia.

In the past, I have paid to go on organised Northern Lights tours, and seen nothing, yet I have stood outside my house and watched the slow moving bands of aurora dancing in the night sky. Quite simply, it is hit and miss. A large number of people who go on holidays with the sole intention of witnessing this natural phenomena end up cold, wet and disappointed. Conditions have to be just right, and luck on their side.

Following our trip to Finnish Lapland last February, it was a ‘must’ to return to Saariselkä. Rather than book the trip through a tour operator, we built our own trip, flying with Finnair and staying in self-catering accommodation. We used the local bus service for airport transfers and for organised activities, we researched the local providers. Doing it this way saved us approximately 50% off a comparable holiday organised through a tour operator.

As luck would have it, it appeared that the conditions may lend themselves to opportunities to view the aurora during our stay on two occasions. I kept a close eye on the weather for two weeks prior to the trip, using the Finnish and Norwegian Meteorological Institutes, as well as keeping an eye on the solar weather using an app called Aurora Pro, and was cautiously optimistic. I spent hours researching how to photograph the Aurora and playing around with the settings, and I invested in equipment that would enable me to use my camera remotely.

We arrived in Lapland in the midst of a winter storm – the descent to Ivalo airport was among the more nerve-wracking landings I have put myself through, not helped by the existence of a wheel camera.

We had decided that, rather than book an aurora tour which held no guarantees, we turned our first night in Saariselkä into our own aurora adventure. A little way from the village centre, amongst the trees is the Aurora Hut maintained by the Finnish National Park service. The Aurora hut provides a heated hut with a viewing platform which during the daytime provides a beautiful view through the valleys towards Kaunispää, where the ski resort is located. By night, when conditions allow, you can stargaze or seek the elusive aurora. There is a wood-burning stove inside the hut, and a woodshed and compost toilet outside. Slightly further away is a fire pit.

Upon arriving at the Aurora Hut, it was clear that it was a popular destination that evening – a large group of Swiss photo-tourists had arrived and set up camp, and throughout the evening, people came and went.

We collected some firewood from the shed and laid a fire in the pit, before setting up the camera and grilling some sausages. The moon, nearly full, was visible for much of the evening, and clouds occasionally obscured the skies. I walked between the fire pit and the viewing deck periodically, and on one such visit my eyes were in the right direction just as the aurora peeked through the clouds. I ran back to the fire pit where my camera was set up just in time to capture the aurora on camera – not amazingly clear, but definitely there.

The rest of the evening passed with little activity, so at approximately midnight we walked back to the apartment. 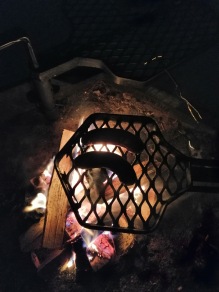 A brief flash of aurora

The forecast for Wednesday night, our final night, was promising: clear skies and a good level of solar activity. One of the activities we wanted to do whilst in Finland involved a snowmobile tour, but neither of us felt brave enough to take the plunge. The company Lapland Safaris provided us with a good compromise: a tour by snowmobile pulled sleigh, in search of the aurora.

We were collected from near the apartment and taken to the Lapland Safaris office where participants were equipped with the appropriate winter clothing for spending hours in the dark arctic night. We only needed to borrow a helmet (yay for being prepared!). Having signed a waiver, we and 30 other hopeful aurora hunters were led to the sledges where we were given a further safety briefing before we set off.

Having never been on a snowmobile before, I was unsure what to expect. In the event I was pleasantly surprised – whilst there were some bumpy parts, it was incredibly smooth and I even felt myself relaxing.

Following one of the many trails that surround Saariselkä, we headed away from the village where we stopped en route to search the skies. Whilst the sky was gin clear, alas there were no aurora to be seen. Never mind! We got back into the sleighs and headed to a hut where the guides set two fires (one inside, and one outside) and served hot berry juice and gingerbread cookies whilst we waited. This was a pleasant interlude and we had the opportunity to ask any questions we had whilst we waited hopefully for the aurora to show.

Just as hopes began to fade, and folk began to shiver, above the top of the hill there was a burst of pale green light: the aurora!

Ordinarily, when one observes the aurora, all that can be seen is a greyish-white ‘smudge’ in the sky. The stronger the aurora, the more chance of colour seen by the naked eye. I was unlucky in catching a photo at this point, because the camera lens had condensation on it from when I ducked inside the cabin to change the battery which had been drained by the cold. Back in the sleighs, we started to head back to Saariselkä. En route, the sky began to dance, and so we stopped again to watch the aurora. By this point, my camera was back to normal and so I was able to take a few photos of the aurora. I had hit the jackpot – my camera settings were just right, and the handheld remote came into its own. 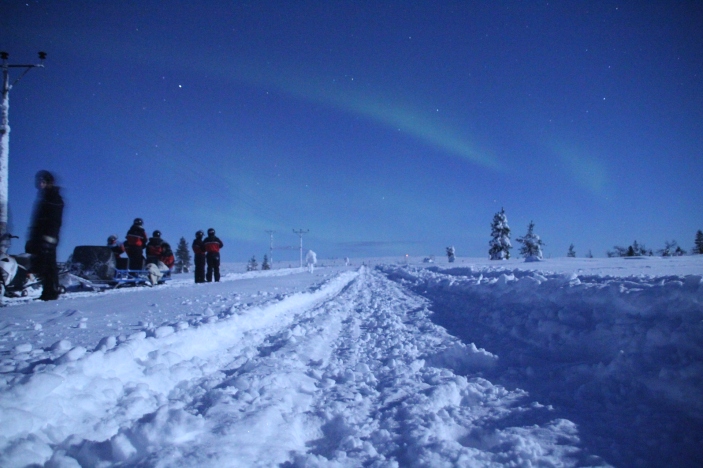 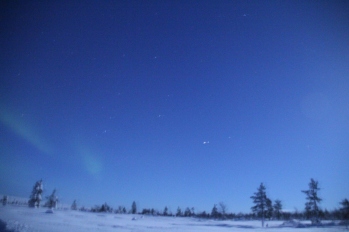 Back in Saariselkä, we handed back our helmets and decided to take a walk, in the hope of spotting the aurora again. We were simply extremely lucky: the aurora were strong and danced directly above our heads. My inner pretentious photographer decided that we would head to the bridge that leads to the Aurora Trail – located at the bottom of the valley, with views to the north, I felt like I’d nailed it. My patience was rewarded, however photographing the aurora with a now-broken tripod (don’t ask!) was not easy, and I had to dig into the snow to stabilise the camera enough to take photos.

In the end, we had to call it a night as we had to be up early for the journey home. We stopped off at Muossi en route for a late-night snack, and from there we took a slow walk back to the apartment. Instead of packing, I headed back out for some final photos, laying in the snow drifts and staring at the stars as the aurora danced is a memory I will treasure. 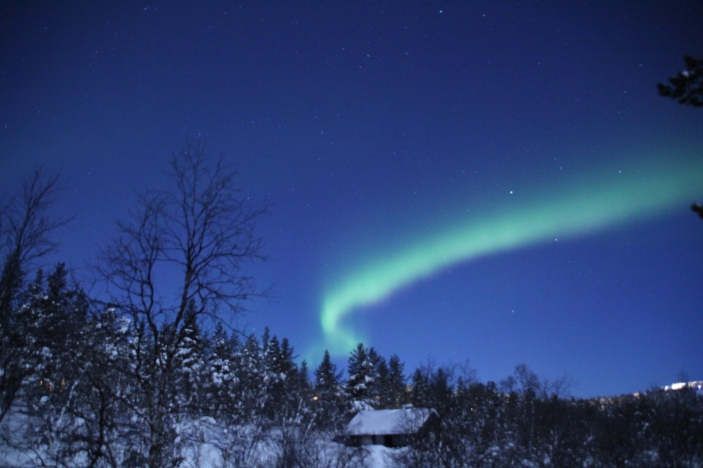 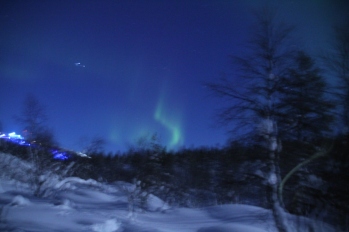 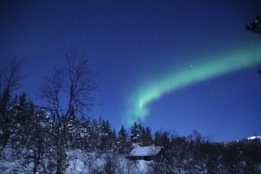 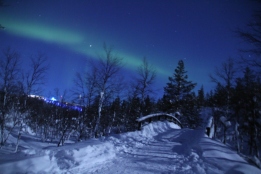 To see the aurora, you need good weather conditions and lots of luck – I would say that the advantage of the organised tour was the ability to travel further from where we were based. It comes at the cheaper end of the aurora tours on offer in Saariselkä, and I think it was good value. However the downsides of an organised tour are the crowds; whilst we were only 32 people (plus 5 guides), the tour lacked the intimacy of a self-made tour to the Aurora Hut. 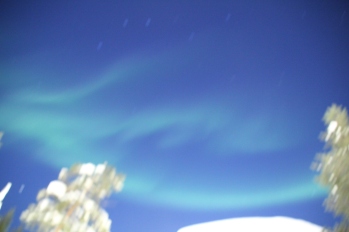 Had the forecasts not been great, I would not have done the tour, but chosen another type to take during daylight. We were extremely fortunate to observe the aurora as strongly as we did. However, I would not hesitate to recommend Lapland Safaris for other organised activities – their communication was clear, and the equipment provided for participants was excellent.