Towards the end of last year, I began to get itchy feet. Unusually for me my future travel plans were restricted to ‘just’ one trip in February, leaving a long tiresome wait for time to pass. The combination of being bored and off work led to me planning hypothetical weekend breaks, no destination out of the question (apart from Paris of course.)

Inevitably my searches gravitated towards Scandinavia, my spiritual homeland. It is no secret that it is my favourite part of the world. Anyone who knows me knows that given the opportunity I would spend most of my holiday time in that region. I frequently contemplate the feasibility of emigrating and spending the rest of my life surrounded by high taxation and fantastic quality of life. Alas unlike my 18-year old self I simply don’t have the balls to drop everything and move to a new country. Hey ho!

Anyway, on New Years Eve I decided on a destination: Stockholm! I first visited Stockholm in the summer of 2009 and have since taken many trips to what is possibly my favourite city, at different times of year. Since my last visit in 2015 I have longed to return, and my new zen outlook (summed up by “do what makes you happy”), convinced me that I should indulge this whim and book a trip to cheer me up in the new year.

The wizardry that is Expedia came up with a package that included return flights with Ryanair and two nights at the Scandic Continental hotel for £201.88/pp. I tried looking for a comparable ‘self-made’ option but nothing came close.

The road to the airport was a fraught one. A heady combination of leaving work later than planned, an accident on the A12 and Friday night traffic meant that we arrived at the airport far later than any of us would have liked, meaning we had to hotfoot it through Security, grab dinner from Burger King, a gin/Sprite combo from Duty Free and then head to the departure gate. Not ideal.

The flight to Skavsta was one of the best Ryanair flights I have ever experienced – the plane, a newer model, was clean, spacious and extremely punctual! Landing at Skavsta, we passed through Passport Control and went straight to the Flygbussarna coach which would transport us to Stockholm’s City Terminal in 1h20 minutes. Our return ticket cost 287 SEK (£23.90). From City Terminalen it was a 3 minute journey on foot to the hotel.
For those who aren’t a fan of cooler temperatures, it is worth noting that it is possible to travel from the bus station to the hotel entirely underground! 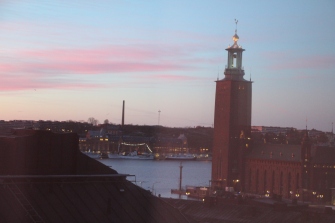 Check in was smooth, and within minutes we were in our hotel room on the eighth floor with a fantastic view of Stadshuset (City Hall). The hotel room itself, much like the building (constructed in 2016) was extremely modern and not necessarily something I would usually go for, but it was clean, comfortable and the bed was fantastic.

The only ‘let down’ was that I felt the water pressure in the shower was weak. However, it is worth considering that my ideal water pressure matches that of a water cannon, so perhaps this wasn’t even a problem!

Breakfast (included) was no less than I expected from a Scandic breakfast buffet – a fantastic choice of continental and Scandinavian, and even hot options. The chain’s attention to detail extended to a separate station for dietary requirements including lactose free, gluten free and vegan alternatives. However my favourite was the self-service waffle machine. They say breakfast is the most important meal of the day and I was very keen to embrace it given the amount of walking I anticipated – I cannot remember the last time I ate such a hearty meal, let alone a breakfast!

Slept, washed and fed, it was time to discover some of Stockholm’s gems…