Edinburgh, Loch Ness and the Highlands

One of our joint Christmas presents in 2016 was a pair of Ryanair vouchers. We debated about where to use them, and eventually decided to book a weekend in Edinburgh for December.

In October, Ryanair announced that they were cancelling a number of flights until March, some with immediate effect. The Stansted to Edinburgh route was affected by this.

Fortunately, Easyjet had similarly timed flights, and so we switched allegiances and used them instead. The only downside of this was that the return flight was slightly earlier, meaning that my dream of visiting the pandas at Edinburgh Zoo was put on hold for a while.

We booked the Hub by Premier Inn Edinburgh Royal Mile hotel. I am a big fan of the Hub concept- modern, Smart hotel rooms in which every inch of space is well used. We paid £200 for two nights, which is more expensive than I would like, but we were visiting the weekend before Christmas when the Christmas Market was in full swing. Usually, I use the Hub hotels when travelling solo, so this time we booked a larger room.

The rooms are small, but well organised. The beds are quite high due to the underside being used for storage. We declined to take advantage of the breakfast offer on this occasion, but I took full advantage of the free teas and coffees in reception.

All Hub hotel rooms are much the same: bright and glossy. The Smart TV offers the latest film releases, as well as local area information for tourists. The bathroom is separated from the sleeping area by semi-frosted glass, and consists of a large shower, sink and toilet. You make the bed yourself on arrival, which may not be to some people’s taste.

We flew from Stansted to Edinburgh with Easyjet. The flight time was just over one hour. Upon arrival at Edinburgh, we purchased a return tram ticket from Edinburgh Trams for £8.50, and travelled to the end of the line, York Place. From there, it was a 10 minute walk to the hotel (once we realised we could cut through Waverley station!) The journey took approximately 30 minutes.

We decided that the best use of our time was to take an organised tour. We chose the Loch Ness, Glencoe and Highlands Tour with Rabbie’s Tours. The tour description reads

“Journey deep into the Highlands of Scotland on our monster-sized day tour. You hear the legendary stories of the Jacobites, gaze into gorgeous Glencoe, and get a chance to spot the mythical Loch Ness Monster.

It’s a tour packed with bewildering beauty, and perfect if you’re short on time and want to see as much of Scotland as you can.”

The tour begins at 0800 and ends approximately 2000. It is a perfect introduction to the Highlands of Scotland, taking in a number of ‘must-see’ locations. We were fortunate enough to visit on a beautiful snowy day. There were a number of stops on the trip, the first being on the shores of Loch Lubnaig.

From there, we visited Rannoch Moor (in the fog), and Glencoe before heading towards the shores of Loch Ness. Here, you could take an optional 1 hour boat trip. We preferred to stay on terra firma and took a walk around Fort Augustus.

In the afternoon, we had a number of stops, including one through a small forested area to view a waterfall. It was stunning, although a bit slippery.

Nick, our guide was friendly and helpful, and answered questions as well as imparting his knowledge about the areas we visited.

On Saturday evening, we visited the Christmas markets before returning to the hotel.

Sunday morning started with breakfast at Rabbie’s Cafe, before we took a walk up the Royal Mile towards Edinburgh Castle. Due to time constraints, we didn’t visit the castle itself, and instead chose to walk to the other end of the Royal Mile to the Palace of Holyroodhouse which was by far a quieter choice, but no less interesting! 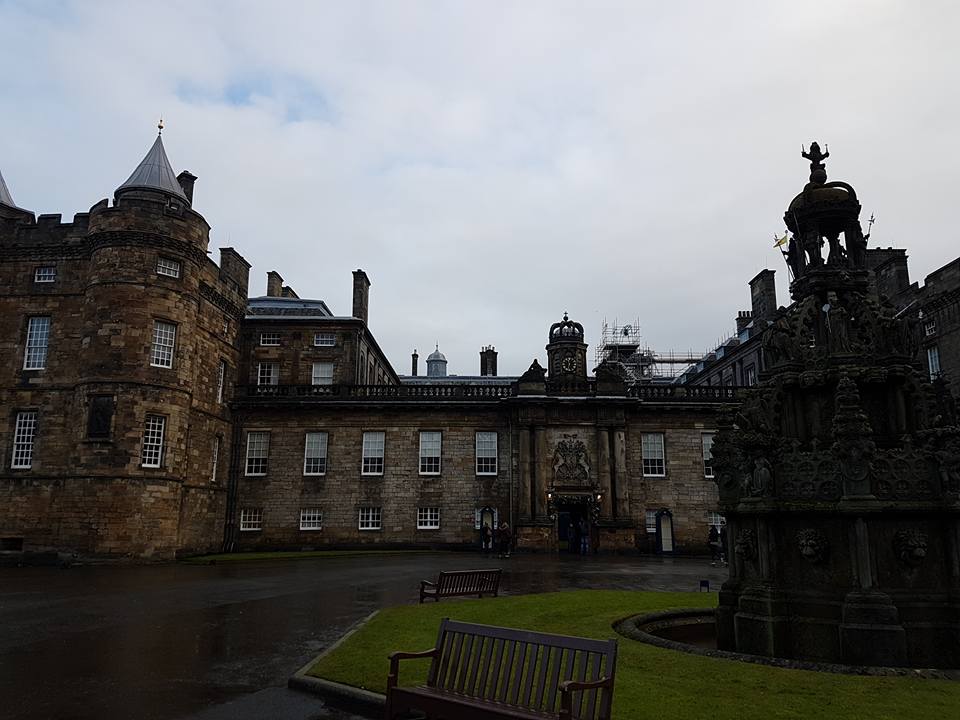